Marriage: The Balance of Truth and Love

Marriage: The Balance of Truth and Love

As a Married Woman,
my life is a balancing act between owning my individual truth and surrendering into my union.

When Adam and I got married, we called ourselves “the fusion of TRUTH & LOVE. “

And by the time we met,
I owned my TRUTH like a badge of honor.
While, Adam walked through the world with his HEART wide open.
~~~

We were already, radically different from the norm~

And as we merged through our sacred sexual union,
My truth became ~ softer.

I OPENED.
I became vulnerable.

I was still my TRUTH,
But I learned to speak with an open heart.

I learned to SURRENDER, while also standing STRONG.

~~~
It took marriage, for this alchemy to take place.

Modern day relationships fear the commitment of Marriage,
But there is a magick to marriage-
because it holds the container for us to change, to grow, to alchemize…
and to become more expansive than we can be on our own.

Alchemy is real.
Intertwining leads to a new SELF.

And that new self can be terrifying.
It can even be wrong, if you chose a person who causes you pain.

BUT! If you choose a person who is the right for you~
You will transform into something radical.

SOMETHING you’ve been waiting for. 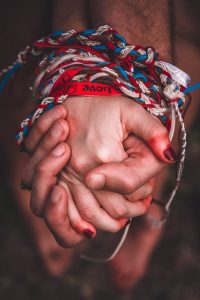