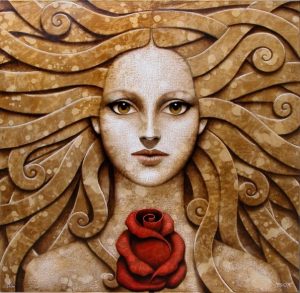 There is a reason why Jesus chose a Whore as his counterpart.
A witch skilled in the art of sexual alchemy and resurrection.

I’ll tell you! Mary Madeleine was not a “good girl.”
She and Jesus were rule breakers.
Leaders. Visionaries. Conscious leaders for a new way.

Mary was powerful because she was wild and outspoken.
She guided from her womb wisdom and her heart.

Mary went underground
because those were dangerous times.

Due to manipulations of their texts,
She and Jesus became leaders for a wave of
Religious Indoctrination that would lead to 1,000s of years of sexual shaming.

But Mary did not intend for that!

Mary was a Priestess of Isis initiated in the Sexual Arts prominent in Ancient Egypt during that time.

Through her knowledge of sexual alchemy
Mary held the key for Jesus’ resurrection.
When Jesus’ seed merged with Mary’s orgasmic womb
Jesus was filled with the power to return as GOD

We all know Jesus as a strong speaker,
a prominent leader, the rock for a movement.
But Mary was the SEX.
And no KING can rule without his SHAKTI.

Mary was the original “WHORE”
A Priestess of Horus.
The Hole Between the Worlds
Seer between the veils

wow this gave me chills!